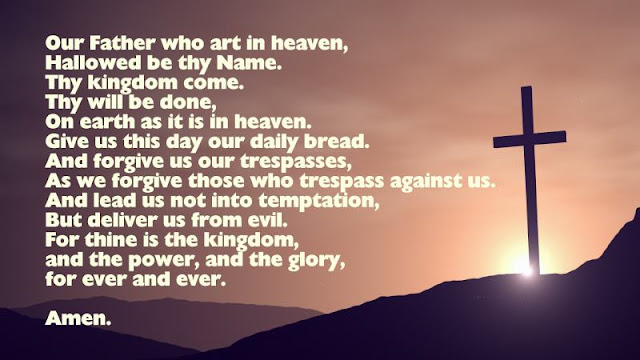 The Church of Divine Guidance Sunday Morning Adult Bible Study Group studying the book Prayer That Turned The World Upside Down: The Lord's Prayer as a Manifesto for Revolution by R. Albert Mohler, The President of the Southern Baptist Theological Seminary.

The Lord’s Prayer is the most powerful prayer in the Bible, taught by Jesus to those closest to him. We desperately need to relearn its power and practice.

The opening words of the Lord’s Prayer have become so familiar that we often speak them without a thought, sometimes without any awareness that we are speaking at all. But to the disciples who first heard these words from Jesus, the prayer was a thunderbolt, a radical new way to pray that changed them and the course of history.Far from a safe series of comforting words, the Lord’s Prayer makes extraordinary claims, topples every earthly power, and announces God’s reign over all things in heaven and on earth. Study along with us by getting a copy of the book by clicking this LINK or the image of the book in the study notes.


Whose Agenda Is It Anyway?

Matthew 6:10 NIV - your kingdom come,  your will be done, on earth as it is in heaven.Last week we learned that the very first petition that Jesus taught his disciples that they should make in prayer is that God’s name be hallowed.  Jesus is not merely saying that God’s name is hallowed; rather, he is asking God to make his name hallowed. The verb hallow, however, simply means to “make holy” or “consider as holy.  Just as we speak of “having a good name” as a way to refer to a good reputation, the Old Testament uses the same idiom to refer to God’s reputation. A name is something personal. It always feels more or less unpleasant when others misspell or garble our name: it stands for our honor, our worth, our person, and individuality. . . . There is an intimate link between God and his name.


How then does God “hallow his name” in the world? First, “hallowed be your name” is a request that the church be sanctified. The church is the steward of God’s name.  We must petition God to “hallow his name” in our discipleship, in our prayer, in our preaching, in our witnessing, in our work, and in eternity. Our ultimate concern is not that our lives be comfortable, but that God be glorified, and that our lives, even our prayers, put God’s glory on display.  Faithfulness in the Christian life makes the glory of God go public.


The second petition, “your kingdom come,” builds on the first by showing us how God’s name is hallowed in the world. God reveals his character and reputation as his kingdom spread to every corner of the earth and as citizens of that kingdom do God’s will on earth as it is in heaven.


The Lord’s Prayer is for revolutionaries, for men and women who want to see the kingdoms of this world give way to the kingdom of our Lord.


But what is God’s kingdom, and what does it mean to pray for its arrival?


We’re going to talk about that today.


Pastor likes to say that the kingdom of heaven is inside us.


Matthew 13:24‭, ‬26‭-‬33‭, ‬38‭-‬50 NKJV Another parable He put forth to them, saying: “The kingdom of heaven is like a man who sowed good seed in his field;  But when the grain had sprouted and produced a crop, then the tares also appeared. So the servants of the owner came and said to him, ‘Sir, did you not sow good seed in your field? How then does it have tares?’  He said to them, ‘An enemy has done this.’ The servants said to him, ‘Do you want us then to go and gather them up?’ But he said, ‘No, lest while you gather up the tares you also uproot the wheat with them. Let both grow together until the harvest, and at the time of harvest I will say to the reapers, “First gather together the tares and bind them in bundles to burn them, but gather the wheat into my barn.” ’ ” Another parable He put forth to them, saying: “The kingdom of heaven is like a mustard seed, which a man took and sowed in his field,  which indeed is the least of all the seeds; but when it is grown it is greater than the herbs and becomes a tree, so that the birds of the air come and nest in its branches.” Another parable He spoke to them: “The kingdom of heaven is like leaven, which a woman took and hid in three measures of meal till it was all leavened.”


This kingdom arrived with the coming of Christ, who urged his hearers to repent because the “kingdom of God is at hand.” Christians are now part of that kingdom. As Paulstated, “[God] has delivered us from the domain of darkness and transferred us to the kingdom of his beloved Son” (Col. 1:13). Thus, even though we await the full expression of God’s kingdom that will come in glory and power at the return of Christ, we are at this time living under the reign of God as his people—we are citizens of that kingdom.


The kingdom of heaven is what the writer of Hebrews said the faith heros were looking forward to.


Hebrews 11:13‭-‬15 NKJV. They all died in faith, not having received the promises, but having seen them afar off were assured of them, embraced them and confessed that they were strangers and pilgrims on the earth. For those who say such things declare plainly that they seek a homeland. And truly if they had called to mind that country from which they had come out, they would have had opportunity to return.

Biblical Theology of the Kingdom

the Bible speaks about God’s kingdom in terms of creation, the fall, redemption, and consummation.  “God’s people in God’s place under God’s rule and
blessing.


Adam and Eve are exiled from the garden, no longer able to enjoy God’s blessing because they rebelled against God’s rule.


In the work of redemption, God continued the work of building a kingdom on earth. Thus, God called Abraham and his children (God’s people) to be a light to the nations (Isa. 42:6; 49:6). He promised them the land of Canaan (God’s place) where he would dwell with them in the tabernacle and then in the temple. Finally, God gave the Israelites his law and the sacrificial system so that they might draw near to him (God’s rule and blessing).  Yet, as we all know, Israel failed to do and to be what God desired of them. Like Adam, they rebelled against God.


The prophets spoke of a day when God would fully and finally bring his kingdom from heaven to earth. Jeremiah, for instance, spoke of a day when God would inaugurate a new covenant, when the law would no longer be written on tablets of stone but would instead be written on the tablets of people’s hearts. In other words, the law would no longer only be something outside of us (demanding obedience and condemning our failure) but instead would be something God etched on our hearts giving us the power to obey his commands.


Jeremiah 31:33 NKJV But this is the covenant that I will make with the house of Israel after those days, says the Lord : I will put My law in their minds, and write it on their hearts; and I will be their God, and they shall be My people.
Jesus came preaching the inauguration of the kingdom. His disciples were allowed a glimpse of his kingdom in glory during the transfiguration (Matt. 17:2;  Mark 9:2).


After his resurrection Jesus declared that he had been given “all authority in heaven and on earth” (Matt. 28:18). The Great Commission is rooted in Christ's declaration that he is the king on the throne of all creation. In our current stage in redemptive history, therefore, God’s kingdom is made up of those who believe in Christ (God's People) gathered in local churches across the world (God’s place) under the law of Christ and partaking of the new covenant (God’s rule and blessing).
Now we have a few key insights helpful in interpreting this petition—“your kingdom come”—in the Lord’s Prayer. God’s kingdom is essentially his reign over his people for their good and his glory. God’s reign is not just his absolute sovereignty; is also a redemptive reign that transforms hearts and creates obedience.


Now we have a few key insights helpful in interpreting this petition—“your kingdom come”—in the Lord’s Prayer. God’s kingdom is essentially his reign over his people for their good and his glory. God’s reign is not just his absolute sovereignty; is also a redemptive reign that transforms hearts and creates obedience. 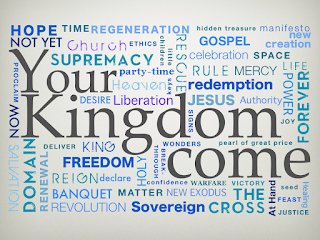 According to Scripture, how does the kingdom of God come from heaven to earth?


The Bible teaches that God’s kingdom only comes as God’s people preach God’s Word, which, coupled with God’s Spirit, produces life and obedience. To use the language of Paul, God’s Word and Spirit change the hearts of sinners such that they are rescued out of the kingdom of darkness and into the kingdom of his dear Son


Colossians 1:13‭-‬14 NKJV  He has delivered us from the power of darkness and conveyed us into the kingdom of the Son of His love, in whom we have redemption through His blood, the forgiveness of sins.

THE REIGN AND RULE OF GOD: YOUR WILL BE DONE

The “will of God” can be used in two different ways. First, Scripture can speak of God’s will of decree, or what we could call God’s sovereign will. When Scripture speaks of God’s will in this sense, it refers to his absolute, sovereign rule over all things.


Acts 17:30‭-‬31 NKJV Truly, these times of ignorance God overlooked, but now commands all men everywhere to repent, because He has appointed a day on which He will judge the world in righteousness by the Man whom He has ordained. He has given assurance of this to all by raising Him from the dead.”
Jesus is not talking about God’s sovereign will because that is already set both in heaven and already on Earth. Jesus is clearly referring to God’s revealed will. He is asking the Father to reshape the hearts of every single person such that God is obeyed and glorified by men.  When the kingdom of God arrives anew and afresh in the hearts and lives of the lost, they begin to obey God from the heart, just as the angels in heaven. In this age, the age of the inaugurated kingdom, we know that reality only in part. In the comingage, the age of the consummated kingdom, we will experience that reality completely.


It is no longer “my will” that is preeminent, but his.  “Here more clearly than anywhere the purpose of prayer becomes plain: not to make God do my will (which is practicing magic), but to bring my will intoline with his (which is what it means to practice true religion).”

WHAT ARE WE REALLY ASKING?